Unfortunately, I missed this album when it was released and am since reviewing this rather late. Before this album I had never heard of this band, and this album was my first exposure to them. Going into this album off of a Spotify recommendation, I had no idea that I would want to review this album. I knew nothing about it! Generally, Spotify will recommend me something that has been out for quite a while or has been out long enough for it not really to make sense if my aim is to review current music. Due to this I went into this album simply to listen with my ears, and not analyse it instantly as I do when an album comes out which I planned to critique. I'm glad I went in open-minded and adventurous, because The Contagion in Nine Steps is the most creative and bizarre album I have heard in a very long time. 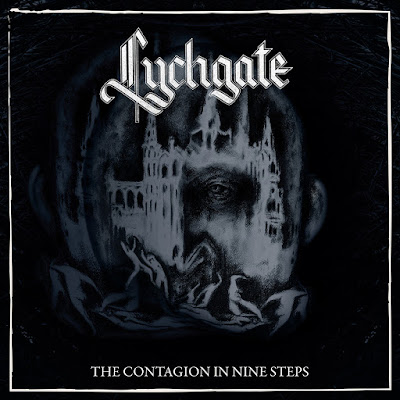 Lychgate are an Avant-Garde Metal band out of London, sharing some members with Esoteric; another band I highly respect (who would do well to release something new soon as well... Not bitter). Because this album is my only exposure to them, I will only be talking about this album and not a background on the band at all. I'll dig in to their catalogue after this review, because to tell the truth they deserve that attention.

Contagion is an overwhelming journey through a variety of styles, time signatures, moods. There is a haunting yet reverent atmosphere to this album, likely due to the heavy and foreboding presence of a church organ all over this album. Kicking off the album with "Republic", one may wonder if the band actually know how to play instruments, sounds like an odd compliment but it fits. Off-time and sporadic organ chords are the first sounds we hear, we go from this to a relatively understandable chord progression leading the organ, a beautifully neo-classical clean guitar passage, a soaring guitar solo, back to the off kilter organ introduction. All within the first minute and thirty seconds of this song. Throughout this albums length, there is no discernible genre to name to describe Lychgate's sound. They stand so far apart from other contemporaries with the release of this album and with the sound they have crafted.

"Unity of Opposites" is the second track on this album and it ended up becoming my favourite on the album. This is possibly the fastest moving song on this album as well, as opposed to the stop and start aggression of "Republic" this track is a flowing, twisting path of choral chanting, non stop barrages of indecipherable guitar-work and the most focused and careful drumming I've heard in a long time on a Metal album. I can only do so much to describe this album, as typical as it may sound it needs to be heard to be understood, and even then it takes some time.

Every other track on this album has a different feel to it, almost all the tracks have a type of piano that doesn't appear anywhere else on the album, Vladimir Antonov-Charsky is the guest musician brought on to Contagion for all the keyboard/piano/organ work and he deserves the greatest credit here in my opinion. I honestly have no complaints or criticisms about this album, every song leads into one another so beautifully and every note here is where it was intended, this album was crafted perfectly. Every member of the band has a role to fill besides individual instrumentation here, without all the layers that this album has it would be a very different experience. The being said, the guitar-work is masterful: the band's two guitarists trade off harmonising with the other and playing completely different lines mixed at the same volume, which creates the clearly desired effect of disorientation. Dizzying and labyrinthine, The Contagion in Nine Steps raises the bar for Avant-Garde Metal in 2018.

Closing out the album, "Remembrance" provides a beautiful reprieve from the chaos and gloom of the past 5 tracks. Slow and melancholic, this track provides a soundtrack to a man contemplating his own impending death before finally accepting death. All members of the band participate in a powerful choir to deliver the most emotionally charged and powerful song on the album. This track specifically, is where all the individual instrumentation comes together perfectly, it encompasses what is so great about this album. Everyone is doing something completely different from the rest, yet it comes together so powerfully and uniquely that you'd miss it if you weren't looking for it.

Popular posts from this blog 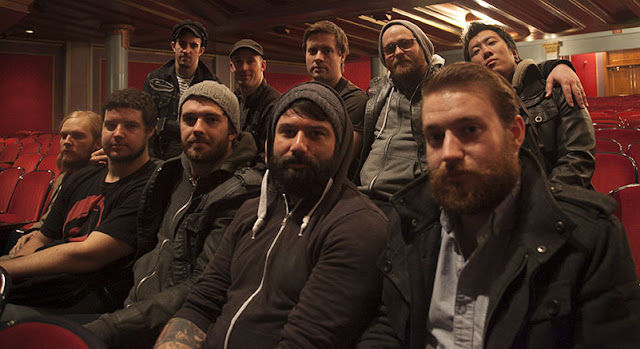 Part of a stacked "second generation" lineup of Solid State Records, a then young label, Haste the Day is an American Christian metalcore band from the state of Indiana. Although they were never anything as groundbreaking as other Solid State bands of the time (see Underoath, August Burns Red, and Norma Jean), Haste the Day represents a decade of the perfection of 2000's era metalcore. What makes Haste the Day such a stand out band is their genuine energy, familiar song structure, and catchy hooks & choruses. Admittedly, I only got into the band at the dead end of their career with the release of "Attack Of The Wolf King", but as my tastes and opinions have continued to open up and grow since then, Haste the Day has remained as a band that I can always put on shuffle and have a good time. As such, I thought I'd go through the band's discography and rank the albums top to bottom, as well as give some of my personal thoughts on each of the albums,
Read more

Music and the idea of "Guilty Pleasures" 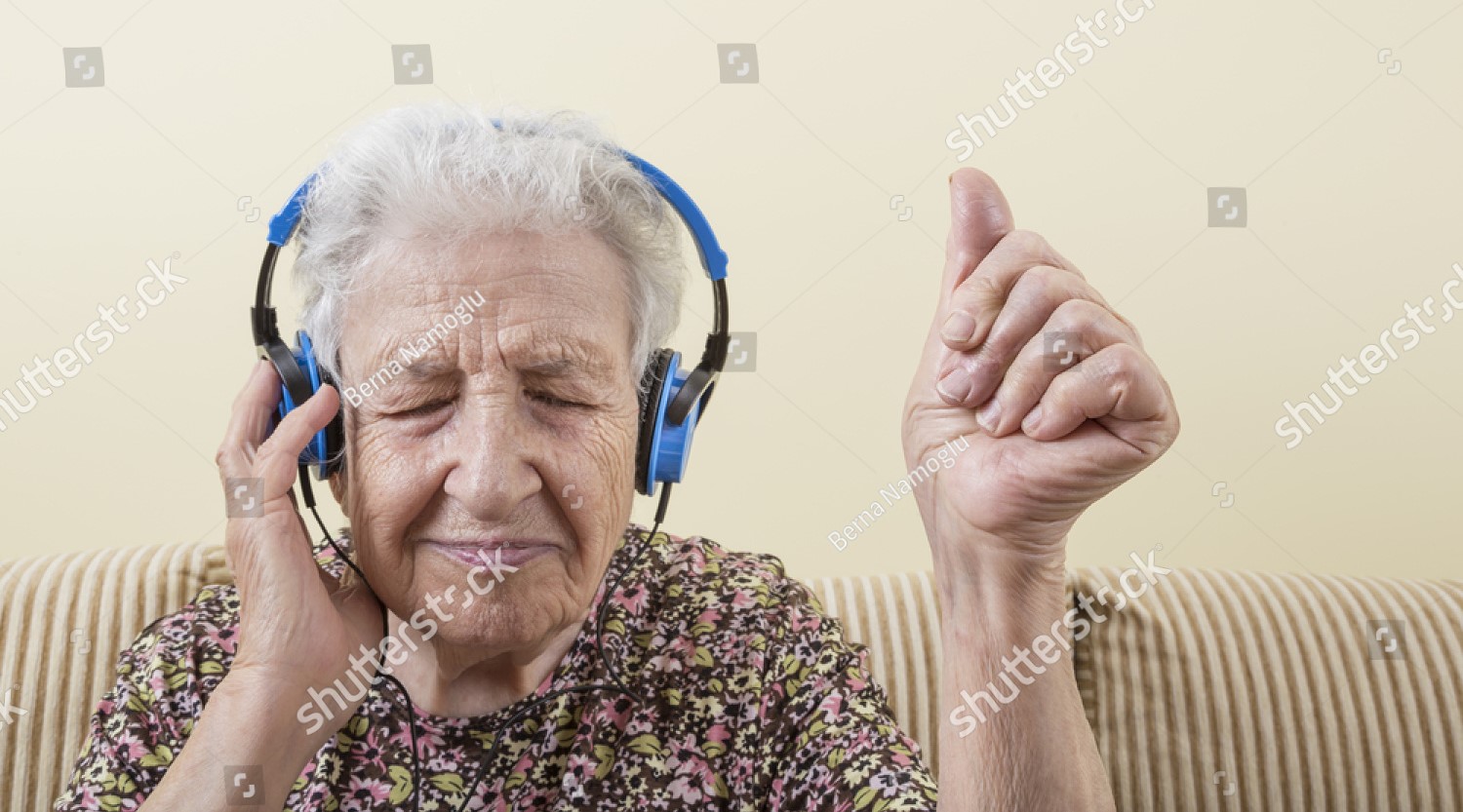 Let's just start off with a bold statement: there are no such thing as "guilty pleasures".      What I mean to express by this is that there is music that one likes and there is music that one dislikes, and there are no guilty pleasures in the purest form of consuming music. Only when you use listening to music as a personality crutch, can something you might listen to become a guilty pleasure. Because at that point, you become worried enough about revealing that listening habit to others that it becomes alike in how you dress yourself, if you listen to something you actually audibly enjoy, and decide against pursuing it because of personal image, you are not consuming music correctly. (stock images are great, don't @ me. I'm lazy and don't want to create a header.) Preference:      I have been guilty before of hiding aspects of my musical tastes to homogenize my tastes as a "Metalhead" when I was younger, I even contacted spotify to un
Read more 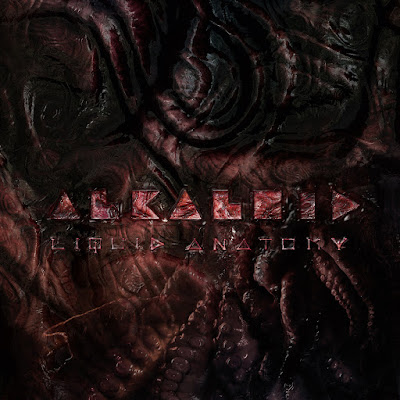 Release Date: May 18th, 2018 Label: Season of Mist Album Link:      Progressive Metal is in dire need of a renaissance, the new wave of Djent bands and Math Rock bands who label themselves or equally are labelled by others as Progressive Metal are a largely sanitised group of bands which end up being interchangeable with one another. There are anomalies within these genres, such as Animals as Leaders, who have transcended genre classification in their four album existence, and other bands like Tesseract and Uneven Structure who have perfected a good albeit simple sound that has spawned many plagiarisers.       While Opeth, forever my favourite band, have drifted gracefully away from the Progressive Death Metal which built their career and fanbase and now exist in a sort of nostalgic Progressive Rock vacuum alongside Ghost and The Sword, they still inspire many today. Among this number are Alkaloid, a "Progressive Metal Supergroup" consisting of members of various b
Read more